A long, distinguished history as one of Australia's premier Arabian horse studs. 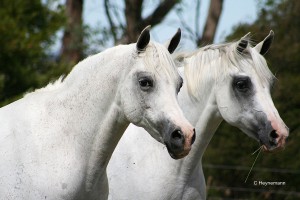 Ennerdale Arabians is one of the oldest continuing Arabian studs in Australia today. The late Mrs Jean Luckock had been involved with horses for many years before she started her Arabian stud. Having learnt to ride on a pony that was obviously Arabian bred she was already favourably disposed to the breed when in 1944 she initially visited Fenwick. At her request Mrs Maclean specially mated Rashid 11 to Dahana for her, and Sirhan, the resultant foal, was to become her first stallion. He arrived at Ennerdale in the autumn of 1946, having been purchased for the princely sum of 150 guineas – a considerable amount in those days and she had to sell numerous horses to acquire him. However it wasn’t until the arrival of Marada (Rakib – Meliha) in 1949 that she had a purebred breeding pair and would lay claim to calling her horses a stud.

The Sirhan progeny were predominantly partbreds for at that time purebreds were few and far between. Notable amongst these were the full siblings Apricot, Impala and Jonathon – all extremely versatile, with jumping perhaps their biggest attribute. Jonathon was selected as an eventer for the Rome Olympics, but an injury sadly prevented him from going. These three horses made a big impression in the district and mares of all shapes and sizes came to stud as a result. Ennerdale Wombat (Fable – Apricot) whom Kate had so much fun and success eventing, was a latter member of this talented family. Sirhan was to lay a solid foundation on which to build.

During this period, when visiting England, Mrs Luckock spent time at Porlock Vale, the late Tony Colling’s famous riding establishment, where she became smitten with a “new sort of riding called Dressage”. On returning to Australia she went about trying to inspire others. Progress was slow, but with the help of international instructors John Sheddon, Franz Mairinger, Tina Wommelsdorf and others, it gradually gathered momentum and has become acknowledged today as the basis of most forms of equitation. For many years she was one of this country’s foremost Grand Prix Dressage judges. She was also instrumental in 1950 in setting up the Pony Club Association of Victoria – initially as an overseas branch of the British Pony Club. She was personally involved in all the early development of P.C.A.V. and was made a Life Member in the mid 1960’s.

However, back to her stud. Moon Kabala (Silver Moonlight –Kassa) replaced Sirhan in 1955, though only for a short time as he was too closely related to her growing band of purebred mares. Line breeding was not practiced in those days as it is now! Rami (Rakib –Rissani) was his replacement in 1960, owned in partnership with Charles Weiland. He nicked well over the Sirhan mares, and following a distinguished career under saddle with Malcolm Barnes, his name has been perpetuated with the Rami Sashes awarded to the Junior Champion Filly and Colt at the Melbourne Royal Show. Fable (Sindh –Fadoura) was the next stallion to arrive in 1967, followed by Izmir (imp U.K) (El Shaklan –Ismailia) in 1979 and both contributed significantly.

With all Mrs Luckock’s horses, conformation and movement were paramount in her choice. She always maintained that while the Arabian qualities of beauty, and fineness in the head and skin, plus high tail carriage, must be shown, these traits are easier to breed in than really good conformation, movement and correct legs. Her stallions were all broken in and ridden regularly.

When in the late fifties and sixties purebred Arabian numbers were on the increase Mrs Luckock was determined that owners should enjoy their horses to the fullest and show others that Arabians were horses to be reckoned with. She worked tirelessly for the promotion of the ridden Arabian and its derivatives both within the breed and in open company. Being a knowledgeable and competent horsewoman she led by example, campaigning her own horses and by organizing countless training days, seminars and competitions for others, many of them at Ennerdale. She was a foundation member of the Arabian Horse Society of Australasia and served as a Board member for a number of years, before being honoured with with a Life Membership in 1973. She was also the foundation President of the Victorian Arabian Horse Association and continued to serve on that committee in numerous capacities for many years. This culminated with her being made Patroness in 1980, though her interest and input continued until her death in 1990.

The last addition she made to her stud was the stallion Mikinda’s Mr Magestic (El Shafie –Woodlyn Sanadu), whom she had judged as a youngster at Adelaide Royal and couldn’t get out of her mind. Sadly she wasn’t to see many of his offspring, but what a legacy she left for the stud to continue with. Fred as he became known, contributed enormously to the stud’s breeding programme. He proved to be a superb ridden horse and sire, with his progeny also having great success under saddle, in the show ring and in endurance riding.

In 1992, needing an infusion of new blood, Kate and Elizabeth went to Bremervale and purchased Bremervale Drambuie, by Dasjmir (Imp) from the double Oxford Decimus mare Bremervale Ismailia. Whilst not a large horse himself, his progeny were bigger from Ennerdale’s taller mares. In 2004 Mrs Nola Cameron of Marbling Arabians in Western Australia very generously made Marbling Nafara available. He instantly appealed, being a well made horse with lovely bone, movement and type. He is still a very imposing horse today at 25 years of age. Nafara is by Naasser (Mustafa –Naadirah) from Marbling Naomi, who has two crosses to Silver Moonlight in her pedigree. He has continued Ennerdale’s tradition of breeding good horses as well as good Arabians.

Today the mare lines stem from the original Crabbet base of Khalasa by Riffal (imp UK) and Oribi by Electric Silver – the afore mentioned resident stallions plus Shafreyn (imp UK), Mustafa(imp Ger) and Arfaja Robard having been used over their descendants. The stud has been reduced from the early days to a more manageable size, but still consists of thirty horses including the four stallions, Marbling Nafara, Ennerdale Magician (Mikinda’s Mr Magestic – Ennerdale Montanya), Ennerdale Odyssey (Marbling Nafara – Ennerdale Obiri), and Torryburn Asahfa (Baranski – Torryburn Rasheeda), with a colt Ennerdale Mandela (Marbling Nafara – Ennerdale Mia) retained in waiting.

Over the years Ennerdale bred horses have gone all around Australia and overseas, many as foundation breeding stock for other studs, some as station sires and many as riding horses for the now numerous and varied equestrian pursuits. They have competed in open company at the highest level as showjumpers, international eventers, Grand Prix dressage, Australian Gold Cup polo and polocrosse and in all phases of Pony Club through to State Championship level, as registered Australian Stock Horses, as well as winning Australian National Arabian Championships at halter and under saddle. There are also numerous horses doing well in the Endurance field, with the joint Quilty winner Curringa Domino being by Ennerdale Toledo (Izmir (imp)- Muskira).

Ennerdale Arabians was conducted for many years by three generations of female members of the Luckock family working closely together in Jean, her daughter in law Elizabeth & granddaughters Kate and Jane. Mrs Luckock and her granddaughters campaigned the horses whilst Elizabeth toiled quietly in the background. Elizabeth was a key cog in the operation of the stud and a good judge of a horse. Her contribution to the Arabian breed was recognized with Life Membership of the Victorian Arabian Horse Association. The strong family unity continued upon Jean’s death with Elizabeth, Kate and Jane taking over the reins. The ‘horse gene’ has now emerged in the the fourth generation of the family with Jane’s daughter Sophie actively involved. Today the stud is managed by Kate, Jane and Sophie and they are acutely aware of the legacy they have been left by Jean and Elizabeth. Ever mindful of the ideals Mrs Luckock imparted to her family, the aims of the stud today remain the same as they were in the beginning. One of those aims is to breed a uniform group of horses and it believes that direction and ideals are necessary within the breeding programme to achieve this. Fads or fashions have never influenced the stud’s breeding programme. Apart from Arabian type, Ennerdale strives for good riding horse conformation and movement, for beauty alone does not solely constitute a good Arabian horse. Kate, Jane and Sophie are quietly determined for the stud Mrs Luckock founded sixty six years ago to continue for many years to come.