Ennerdale is one of Australia's oldest continuing Hereford studs with a long history of producing quality livestock, that is still conducting an annual on property bull sale.

The Ennerdale Hereford Stud was founded in 1943 with four Colly Creek females of the Prudence, Chloe and Matchless families given to Mrs Luckock by her father Mr L.J. Weatherly, then principal of the famous Colly Creek stud based at Willow Tree in NSW. The commercial herd commenced in 1939, also upon Colly Creek bloodlines.  In 2001 the Poll Hereford stud was established, using proven and elite cows from the Hereford stud in Embryo Transfer programmes to form the foundation. Ennerdale has since enjoyed seventy six years breeding whiteface cattle, undoubtedly driven by the passion and dedication of four generations of the Luckock family.

The aims and principles encompassed during the history of the stud has been an important ingredient ensuring its continuation.The stud has remained commercially focused, having always received paddock competition from sheep, horses and cropping, as well as divided labour attention and resources from the family. It has been a conducive media in which to monitor the progress of the stud’s aims: the breeding of sound and structurally correct cattle with good fertility and milk, constitution, temperament, longevity and the ability to perform with low maintenance requirements. Every attempt has been made to breed a uniform and well balanced herd of cattle, resisting the temptation to breed for extreme traits. All efforts have been directed towards breeding honest cattle with consistent performance.

The Luckock family have always believed when breeding livestock that consistency of animals (cattle, sheep or horses) will only develop through having ideals and planned direction within a breeding programme. Ennerdale has never based its criteria for sourcing new genetics upon following fads and fashion. The stud has invested heavily in stud sires over the years from South Booroook, Midgeon, Ardno, Hobartville, Lowanna, Windsor and Yarram Park. In more recent years Ennerdale has preferred to introduce new genetics predominately through semen packages with Smithston, Mawarra, Wiranya, Allendale, Guilford and the Canadian studs  Rocky Haven Hereford Ranch and Remitall West providing some successful outcrosses.

Whilst the stud used the show ring as a yardstick to measure progress, Ennerdale has not exhibited in the show ring since 2004 owing to the time, labour and costs associated with showing. It achieved success with championships in Melbourne and Sydney, with perhaps the highlights being Ennerdale Scandal’s Senior Championship double at Melbourne and the Sydney Royal Hereford Feature Show and Ennerdale Fiddler’s fifth placing in a class of 39 bulls at the World Hereford Conference in Sydney 2004.

Since then the property has been run as a family operation and time constraints have restricted such forms of promotion. The main focus is directed towards the commercial producer and the stud has both enjoyed and appreciated some long associations with clients – the most notable being that of Mr Laurie Kenna and his family at Cliffney Park, Ellerslie, who have been purchasing bulls regularly from Ennerdale for 54 years.

An on property auction has been conducted annually with the forty sixth sale being held on Friday, 4th March 2016. 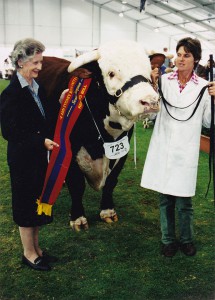 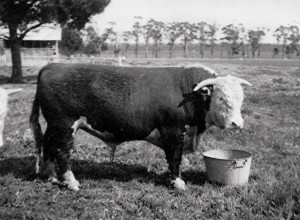